Ingest, Indexing, Retrieval, Editing and Distribution, “all in one lightweight workflow” 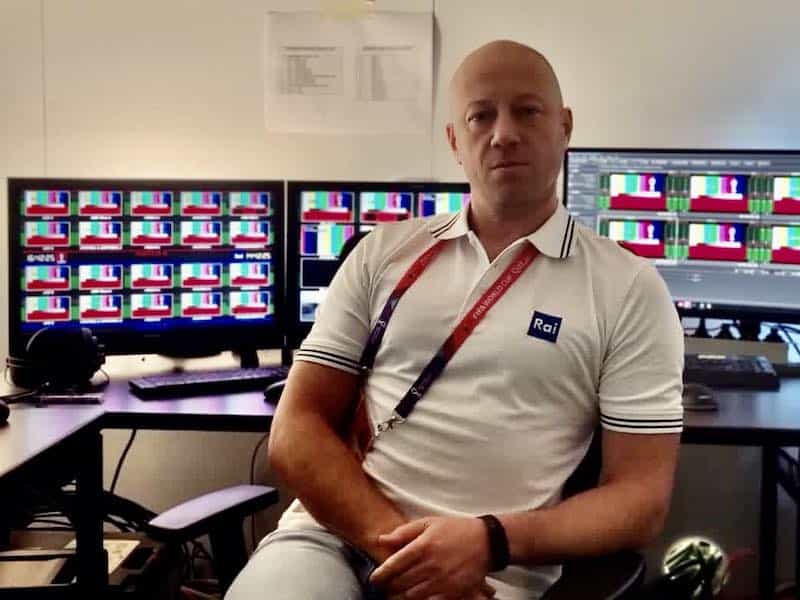 Rai at the 2022 FIFA World Cup in Qatar. By Roberto Landini #Presspool - #SVGEurope

Piero Rossini from the "Assistance to Heavy External Filming" Rai department, talks to us about the project he started in 2009 and developed internally in Rai with colleagues at the time, @MarcoMassaroni, @GiuseppePatanella, @MauroAngelucci, @DanteRuggeri.

SVG: “In a recent interview (see above) with the Project Manager of the World Cup in Qatar, @DanieleGotti, he told us about an editing system created by Rai in an unusual integrated workflow. What is it about?”

#PieroRossini Rai: "In practice, we have internally created, and then improved over the years, a small integration of devices already existing on the market, creating an optimized, fast, non-proprietary system that performs coordinated ingest functions, simplified MAM, editing and publication of contents, through an optimization of the workflow”.

SVG: “First of all, how was it born, how was it received, and where does the workflow of the “Rossini System” start from?”

PR: “It was born as a fast server capable of allowing the sharing of materials with the various editing suites based on the editing software that we had already been using for some time in the company, #Edius by #GrassValley.

Everyone immediately liked the system, even if it was never recognized as "proprietary" precisely because it is simply a workflow.

At the time we presented it to the #RaiEngineering departments and the Technology Department which, operating at much higher levels, gave us the go-ahead to continue with the experimentation.

We, therefore, moved to refine it and we optimized it after collecting the precious impressions and recommendations of the editors in the field: we asked them to understand how we could help them to make their work more "human", light and quick.

So we developed a sort of simplified MAM that could assist them in their daily operations and today, in practice, the workflow starts from ingesting and creating manual tags on individual clips.

We don't make long recordings or partition the recordings like a traditional MAM typically does.

We import all single clips into ingest and gradually apply the "conventional" tags decided by us together with the editors, so that they can then search and find everything they need, exactly as they want, in a simplified and very fast way, with Windows Explorer.

It is a sort of manual upstream indexing, based on the work of two people who, in the Doha IBC in Qatar, manage 6 entrances each.

Each indexed clip goes in a folder, in the database and is stored in the #Qnap #NAS with bandwidth over 40GB on the Lan; from here, with #Rai #VmoverMediaExchange, we can send everything to the production centre in Rome, but also allow access to all the edits that are connected via LAN with fast 10 GB copper connections". 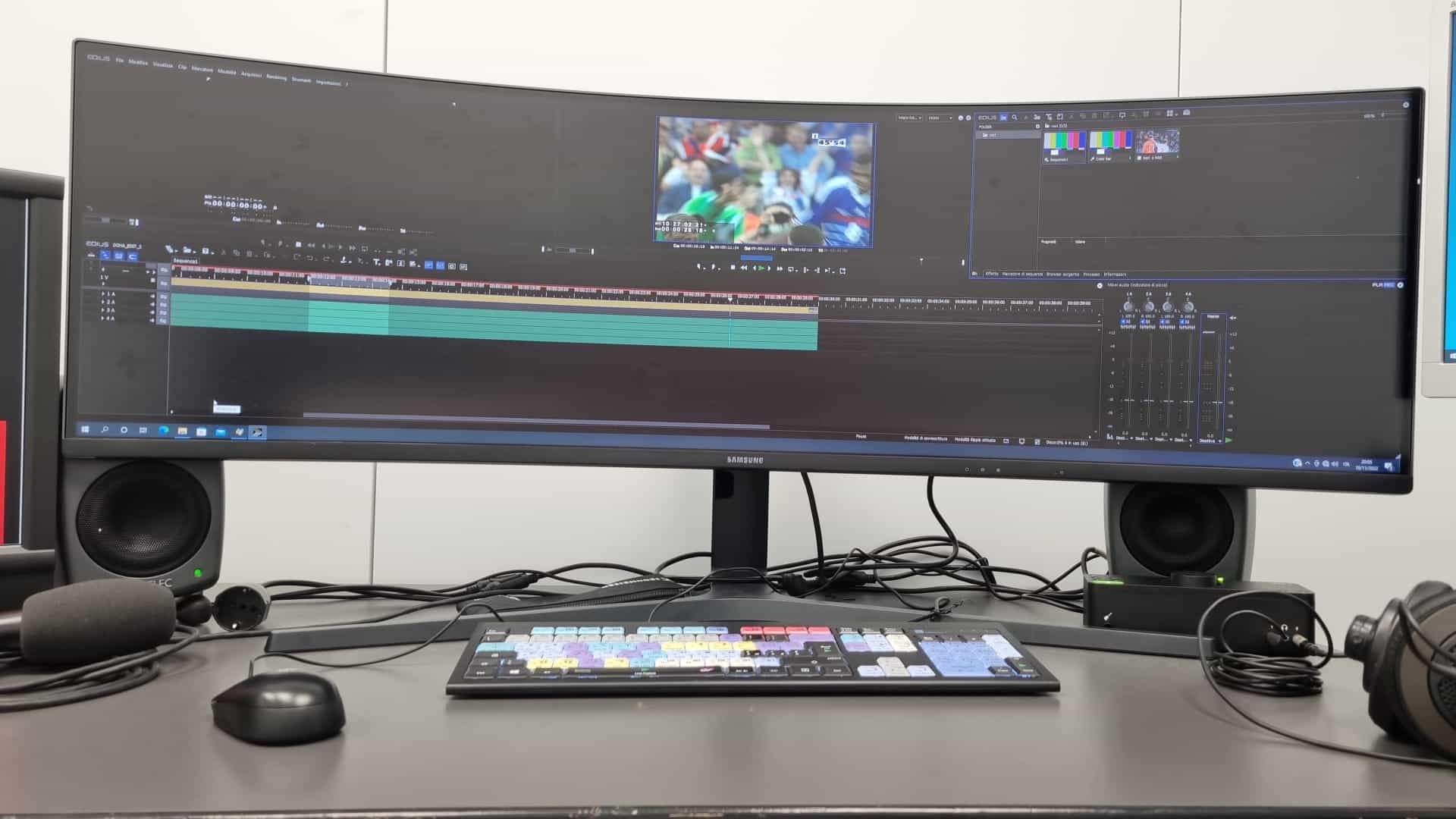 SVG: “Basically everything began as an editing and storage system shared between different suites. How long have you been perfecting this system, how has it evolved and didn't there already exist similar systems?”

PR: “The project started in 2009 within Rai because at the time we wanted one of the fastest servers capable of sharing the material in the various edits. This is also because in the structure there were already editing suites with Edius from Grass Valley which operate on open files, also ingested by non-proprietary devices.

Nas servers by Qnap were available on the market and we were able to use them immediately; they were fast enough to allow us to ingest from third-party devices and then share the ingested contents simultaneously and in real-time with the editing suites.

Then, over time the system has grown becoming even more interesting because we have added an almost tailor-made ingest section for Edius, namely Metus Ingest, a software that allows "edit while ingest".

With this, all the editing suites can access the contents even while we are inserting them into the system: the various workstations can edit and finish stories at the same time.

Some proprietary systems already existed at the time and were also available in Rai, but they were and are much more expensive.

Basically, by starting to compose "pieces" of different and much cheaper hardware, we managed to create a workflow that closely equals much more expensive proprietary systems.

However, this required, and still requires, much more commitment on a human level, as we manually manage the MAM by forming a database of everything we are going to record". 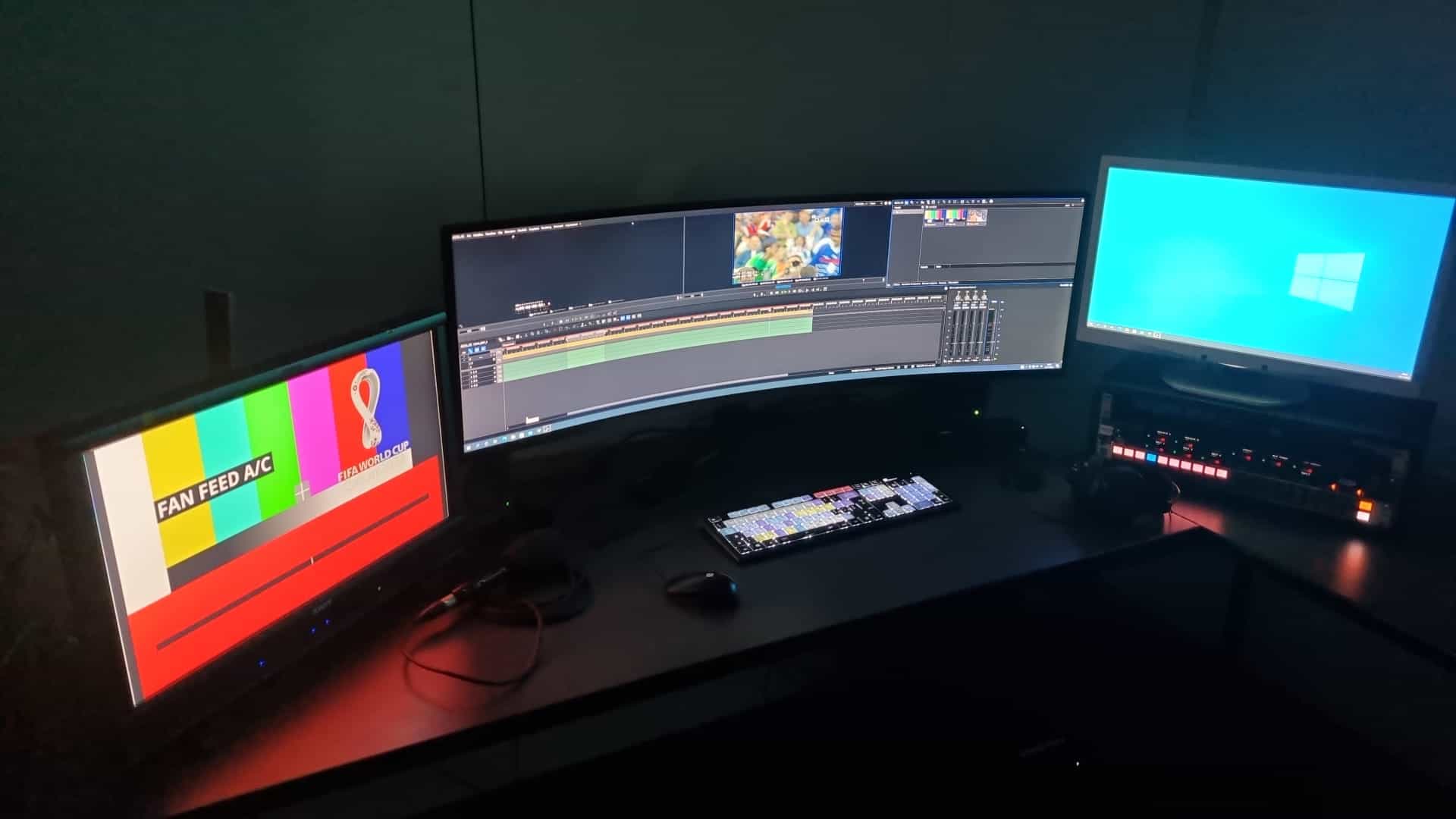 SVG: “What other devices make up the system, or workflow, adopted for the World Cup and, earlier, what were the first jobs managed with these tapeless methods?”

PR: “In the case of the trip to Qatar, where I work together with colleagues #RobertoMandolini and #MassimilianoLiberati, we have also integrated a Simply Live backup, to make replays, which is also very fast in creating clips for export.

Then, while we record the events, two operators refine the clips, and export them immediately to the Qnap Nas server and all the editors, using a simple Windows window; they can perform a quick search of the terms that we have coded for the MAM and find goals, penalties, slides, in the blink of an eye.

From here the various edit stations can compose all the editing work very quickly and then be able to send these contributions on the air immediately.

#EdiusX, the latest version of the edit system, also allows export in the background, i.e. while they are editing they can send jobs where needed and continue managing the contents on the other inputs, without stopping.

All this happens without problems thanks to the 4 QNAP Nas that we have implemented because we have differentiated and centralized the ingest part with respect to that of the various shots arriving from the stadium backpacks. The data ingest system is centralized in a master control.

We communicate with the editors via an intranet chat via PC and, by distributing the necessary instructions on the chat, we notify them of the new content available in ingest so they can quickly bring it to their editing timeline, by browsing with Windows explorer.

They can edit without ever stopping, while we can continue the ingest and inform them immediately via chat as soon as new clips are available.

Since 2010 we were already working in tapeless mode and all materials on file; since 2009 we have started using this workflow which is increasingly stable and considered very suitable for a considerable range of so-called "light" applications. 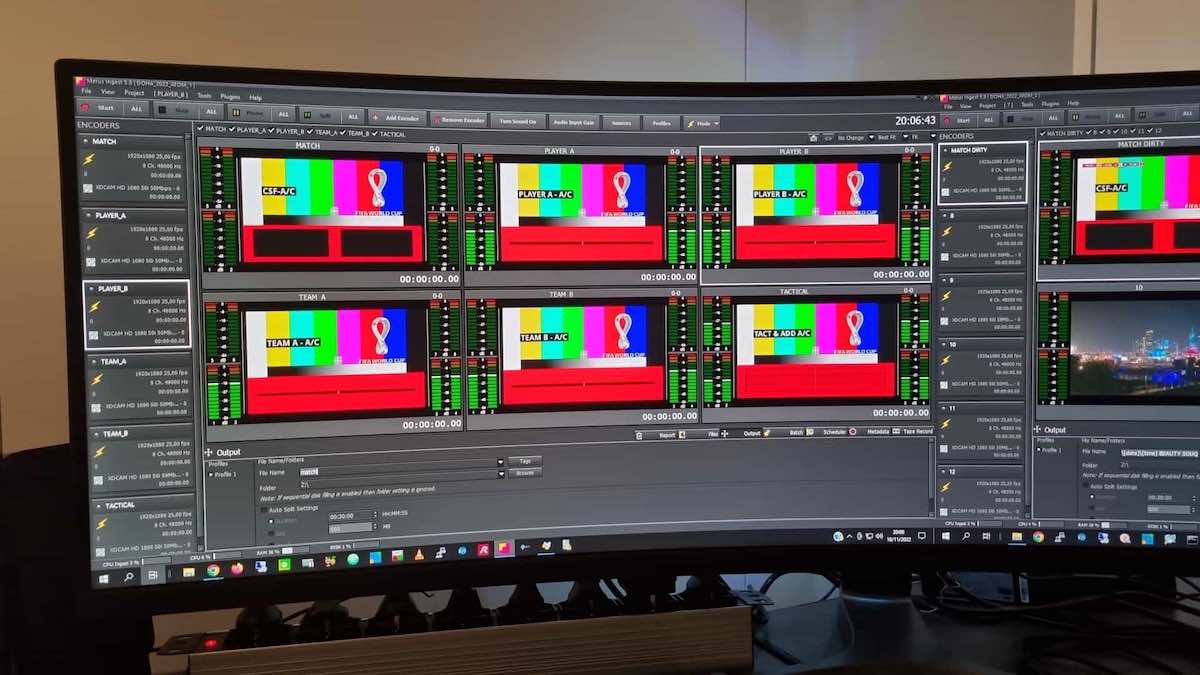 SVG: "Can we better describe the system implemented in the Rai compound in Doha from a more technical point of view?"

PR: “The system is not proprietary, it is based on Edius for editing, on Qnap servers as shared storage and also video ingest servers: we have perfected the workflow linked to the need to do everything quickly, precisely starting following the trips of the Pope and we've perfected it for sport and beyond.

Usually, the video cards are from #Blackmagic on laptops with Thunderbolt that record the video signal and then #Metus system runs on the laptop, all on a Lan cable.

Here in Doha we brought two desktop PCs with 8 inputs each, therefore 16 ingests plus 16 spare ingests on #SimplyLive which serves as a backup on two Nas.

When travelling we usually take a small server via LAN, four PCs and a portable card that fits in the PC bag”. 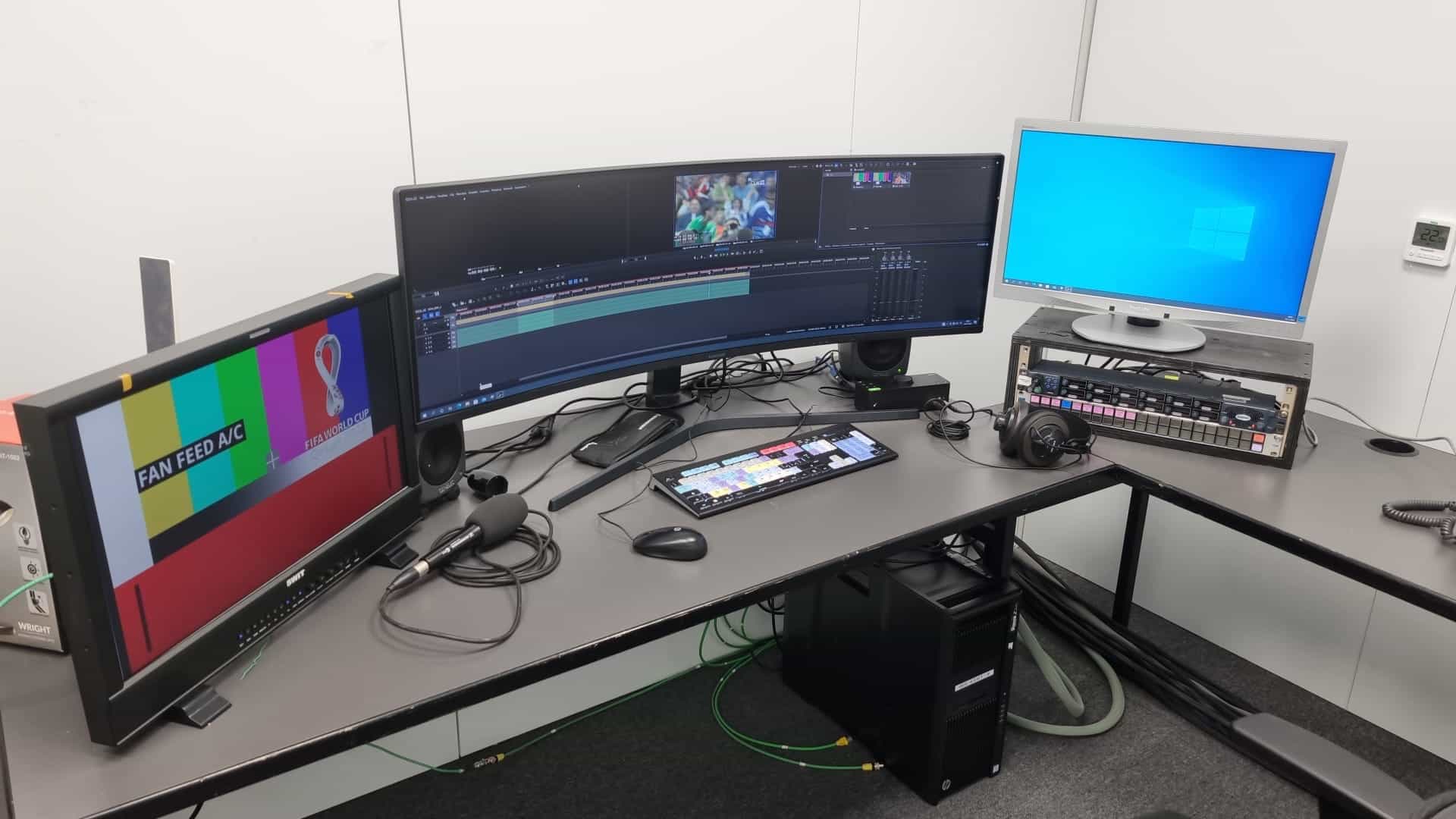 SVG: "Is it correct to say that in this way you have contained costs, optimized the speed of realization and therefore efficiency?"

PR: “Of course; by assembling a system with non-proprietary components, we have created a flexible and lightweight workflow. Plus, at this price, there's no other system that fast.

In the past, with this workflow, we were able to use even 12 light edit stations without weighing on the costs for the company.

Here for the World Cup, we have provided 5 edit stations, 4 of which are suites in the IBC plus one located in the Souq, less than twenty kilometres away.

However, not having a large bandwidth availability, we preferred to install a physical machine here in the IBC and they from the Souq access it virtually remotely, from their workstation.

From that workstation housed in special containers under the studio set up on the first floor of a special building in the Souq, they work on the images that are physically here, remoting the machine, thanks to the data that travels over optical fibre.

Normally for a similar configuration with 12 ingests, we rely on a proprietary system, a powerful database with #MAM on the server that tags everything, often automatically, which guarantees a very accurate and professional search and then relies on a #SAN, usually sturdier than Nas (although less fast in some respects). In these cases, well-known noble configurations are typically used which cost from 150,000 to 200,000 euros, while our overall workflow is just not much over a ten of thousands, therefore a decidedly less heavy economic commitment".

SVG: “Rai has centres of excellence and technical and operational experimentation that the whole world looks up to with admiration. How did they welcome this “assembled workflow” and how can we summarize the ingredients of this successful recipe in points?”

PR: “We are from the “Nucleo Impianti Speciali delle Riprese Esterne Rai” and we are certainly not part of the Rai Research, Technological Innovation and Experimentation Center in Turin, nor part of the seemingly prestigious Rome Technology Department.

What we have assembled is a useful development for the "Heavy External Shooting Technique Dept" that comes from direct experience in the field. As a former editor myself, I knew exactly what was needed and enlisted the help and advice of a few editors before I started experimenting. 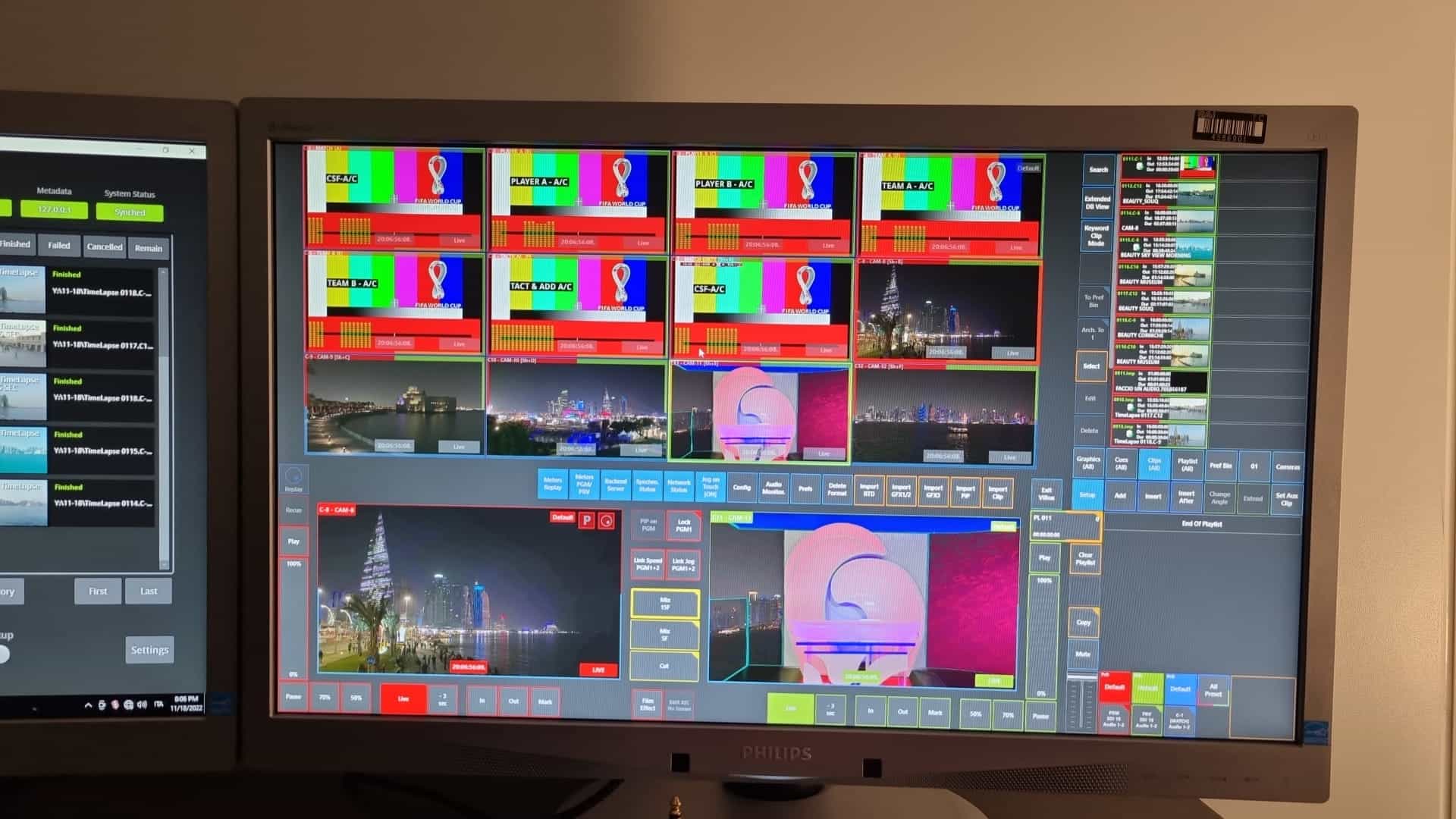 This lightweight system works in real-time without rendering anything, compared to other expensive editing systems that are certainly much more complete in many respects, such as filters, audio processing and much more.

Ours is much more spartan but very fast and therefore is perfectly configured to our needs for lightness and speed on the field, especially in sports.

Perhaps the real secret lies in the well-done ingest coding, which makes available only what can really be used, therefore a manual MAM system configured precisely to the needs. This allows you to harmonize well with the team working in the field.

In one formula: a lightweight, optimized, integrated workflow for ingest, MAM, research and editing, with a low-cost profile and maximized compatibility with air travels".

We strive for accuracy and fairness. If you see something not feeling right please let us know